Reduced Supply May Put a Floor Under Uranium Prices

While uranium prices plummeted from a peak of $137/lb. during 2007 to around $20/lb. in November 2016, that alone is not enough to call a market bottom. However, a substantial reduction in supply appears to support the case that uranium prices have bottomed and may be poised to advance.

Supply Is Contracting
Supply continued to expand while prices were declining through 2016.

Primary Supply
Primary supply refers to uranium that is extracted directly from the ground.

Aggregate Supply Started Declining in 2017
However, since 2016, miner, in aggregate, have been cutting production. This has led to lower primary uranium supply as the above chart highlights.

These cuts began to reduce the overall supply of uranium when Cameco, a large Canadian uranium miner, closed two of its mines in Canada. 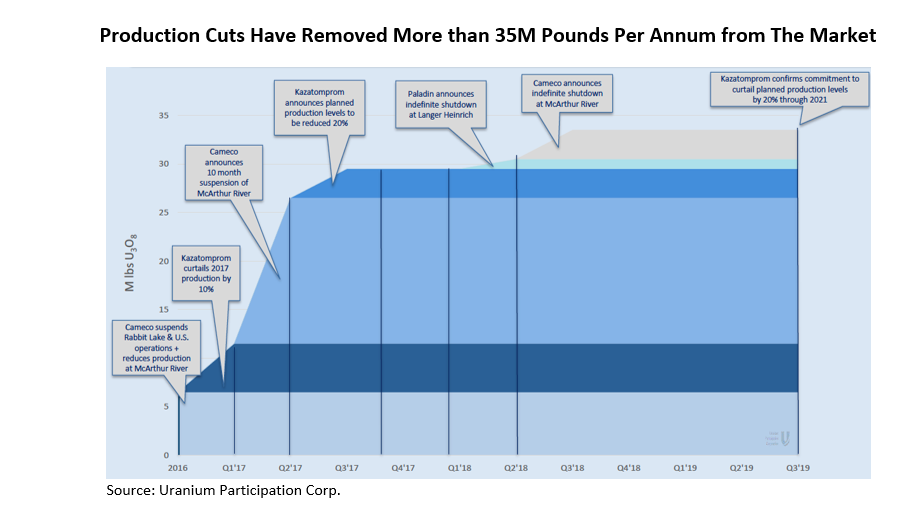 Further Spurred by Large Production Cuts at Kazatomprom
During December 2017, Kazatomprom, the largest uranium miner in the world, announced that it would reduce uranium production by 20% over three years beginning in January 2018. According to the Financial Times, the company’s cuts are equivalent to around 7.5% of total global supply.[1] The company has not disclosed any production plans past 2021. However, it noted that it “does not expect a return to full production until a sustained market recovery is evident and demand and supply conditions signal a need for more uranium.”[2]

By seeking to replicate the index, URNM looks to provide investors with access to both miners and holders of uranium.

Carefully consider the Fund’s investment objectives, risk factors, charges and expenses before investing. This and additional information can be found in the Fund’s full or summary prospectus, which may be obtained by visiting (urnmetf.com). Investors should read it carefully before investing or sending money.

Investing involves risk, including possible loss of principal. In addition to the normal risks associated with investing, international investments may involve risk of capital loss from unfavorable fluctuation in currency values, from differences in generally accepted accounting principles or from social, economic or political instability in other nations. Emerging markets involve heightened risks related to the same factors as well as increased volatility and lower trading volume. Narrowly focused investments, investments in smaller companies, and those in commodities typically exhibit higher volatility. Issuers in energy-related industries can be significantly affected by fluctuations in energy prices and supply and demand of energy fuels.

There is no guarantee the fund will achieve its stated objective. Indices are unmanaged and do not include the effect of fees. One cannot invest directly in an index. The fund is non-diversified.

Shares are bought and sold at market price (not NAV) and are not individually redeemed from the Fund. Brokerage commissions will reduce returns. Market price returns are based upon the midpoint of the bid/ask spread at 4:00 PM Eastern time and do not represent the returns you would receive if you traded shares at other times. The first trading date is typically several days after the fund inception date. Therefore, NAV is used to calculate market returns prior to the first trade date because there is no bid/ask spread until the fund starts trading.

Commodity prices may be influenced or characterized by unpredictable factors, including high volatility, changes in supply and demand relationships, weather, agriculture, trade, changes in interest rates and monetary and other governmental policies, action and inaction. Uranium Companies may be significantly subject to the effects of competitive pressures in the uranium business and the price of uranium. The price of uranium may be affected by changes in inflation rates, interest rates, monetary policy, economic conditions and political stability. The price of uranium may fluctuate substantially over short periods of time, therefore, the Fund’s share price may be more volatile than other types of investments. In addition, they may also be significantly affected by import controls, worldwide competition, liability for environmental damage, depletion of resources, mandated expenditures for safety and pollution control devices, political and economic conditions in uranium producing and consuming countries, and uranium production levels and costs of production. Demand for nuclear energy may face considerable risk as a result of, among other risks, incidents and accidents, breaches of security, ill-intentioned acts of terrorism, air crashes, natural disasters, equipment malfunctions or mishandling in storage, handling, transportation, treatment or conditioning of substances and nuclear materials.

You are now leaving.